Once again, another game has been finished on stream, and therefore it now falls under my gaze as I attempt to review it.  I have a small, but cosy, relationship with the Shantae franchise as I caught the bug for the belly-dancing half-genie at the third game (one of the many great games I grabbed in the Nindie Humble Bundle a couple of years ago). Here I am finally catching up with the franchise by stepping back to play the second game. So what did I think?

Risky’s Revenge sees the player return to the world of Shantae as her uncle is about to show off a relic that he uncovered. The town is incredibly excited about this, for some reason, and Shantae is essentially dragged along to the show. Obviously shit goes down and Risky Boots crashes the party and steals the relic, in this case a magic lamp. This kicks off the events of the game, as Shantae goes on a quest to find the magic lamp and stop whatever Risky is up to. 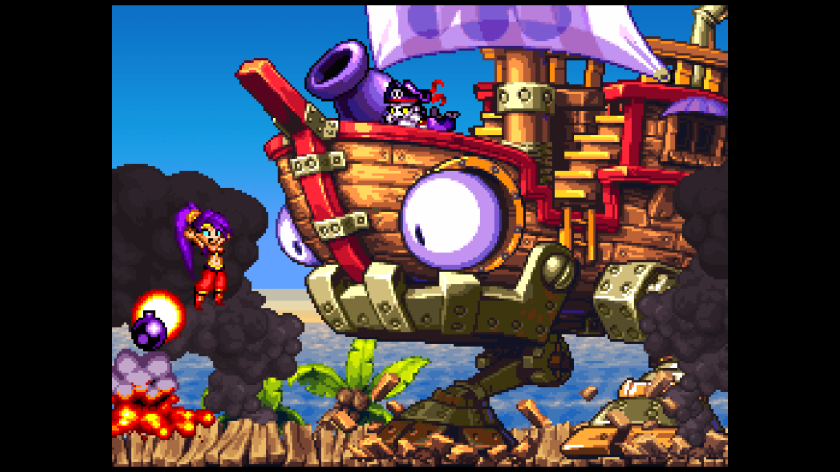 The game is what you would expect from Shantae with all of it’s hair-whipping goodness. The player then has to run and jump through various themed areas, dispatching enemies and completing small quests for other characters. This being a Shantae game, the quests are notably ridiculous, including finding the parts for, and making, a coffee latte for a zombie. Hidden throughout the game world are various collectibles that can be used to augment Shantae with spells and regenerative items. Furthermore, with this being a Metroid style game, progress through the game is made through unlocking new abilities which takes the form of transforming into various animals by belly dancing. These transformations are some of the most clever aspects in the game in my opinion, with each animal having various different attributes making them available in multiple situations.

This does not mean that everything is rosy in Shantae: Risky’s Revenge and one big issue makes the game a bit of a chore to play at times; that goddamn map. When I first started playing the game, I thought the map was clever as it accounted for the ability to jump into the foreground and background, therefore the multi-tiered map was a good decision for tracking progress with such an ability. However the map, at points in the game, is utterly fucking useless. Any point in which Shantae is not on the main paths, there is both no map nor any way to track movement. So, when exploring caverns, underwater, or the various dungeons, good luck if you want to know where the fuck you are. Seeing as that roughly half of the game is spent exploring such areas, the lack of a map or progress marker is deeply frustrating. 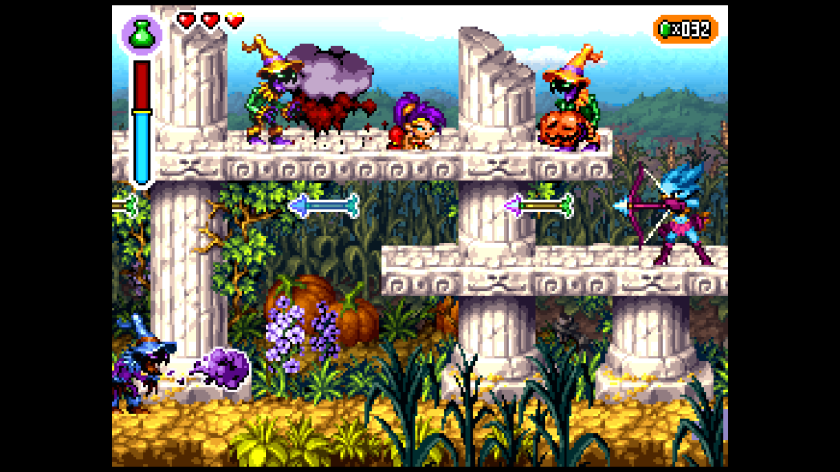 Aesthetically, Risky’s Revenge is incredible, falling into a similar vein inhabited by games like Shovel Knight. With the version I played being a port, the game itself is very retro and sprite based with the various cutscenes having crisp and clear high definition artwork. This combines for a beautiful Saturday morning cartoon feel (albeit with a little more breasts, seriously, all of the female characters have this aspect of them almost excessively highlighted), and Shantae honestly has some of the most fantastic character designs in modern gaming. The music in this game is brilliantly bouncy and has a distinctly pirate feel to it, perfectly complimenting the game itself. In other words, to look at and listen to, this game is close to flawless. Oh, and the monkey transformation is the cutest thing in existence and I’ll hear no argument against it.

Whether I can recommend Shantae: Risky’s Revenge or not depends almost entirely on if you enjoy 2D platformers and can endure one with an almost unbearably shitty map. It’s a fantastic game, with tight controls, beautiful locations and characters and a genuinely charming story, it should just be a little less of a ball-ache to navigate around. I can’t give it the top score, simply because of the above-mentioned frustration, but it’s easily in the upper tiers of games I’ve played in 2017.