This article was originally posted on Nintendo Scene on 24th September 2017.

It’s that time of year again, when gamers of all ages descend upon Birmingham for the annual Eurogamer Expo. Nintendo were once again there in force, with tournaments and a large amount of new and upcoming games. Obviously Super Mario Odyssey made up the lion’s share of the floorspace devoted to the Big N, but what did I get up to at the event? As a short disclaimer before I start, I’ll only be talking about titles that I played or set out to find out more about, so there maybe other titles unmentioned here that were present that I missed.

Starting with the arguably biggest game there, Super Mario Odyssey, I got to have another ten minute run around the wonderfully charming game world. The build that was available there was the same as the one that Wes and myself played previously at the Switch press event in Windsor (our initial thoughts are here), but on this occasion I played the city level instead of the desert one. One thing that struck me quite strongly this time was that, much alike Breath of the Wild, there is a tremendous amount of attention that has been paid to the details of the experience.

To give an example, as I was wandering around the city, I noticed that all of the traffic lights were lit up with a question mark. I thought to myself, “I wonder if these can be hit like Question Blocks”, and I was so pleased that they actually could, I grinned in spite of myself. If you couple with this the fact that poking around every part of the level actually uncovered cleverly hidden (and immensely satisfying to find) Moons, you’ve got a game that is a joy to explore. In short, I cannot wait for this game to come to Switch, and its not too long either with it only being a month from now on 27th October.

Next was the game that I am simply most excited for this year, Fire Emblem Warriors. Unlike Odyssey, this title was definitely a newer build than I had previously played. On this occasion I had the privilege of playing a new map, with a new Commander to take down and, more importantly, brand new units to use in the form of the Royals of Fates. So I got to experience the drastically different gameplay styles afforded by playing as Camilla, Xander, Takumi and Hinoka. As well as playing new characters, I also got to see how other new units play through the means of defeating them myself (and you can bet on the fact I spent a long time watching how they play). 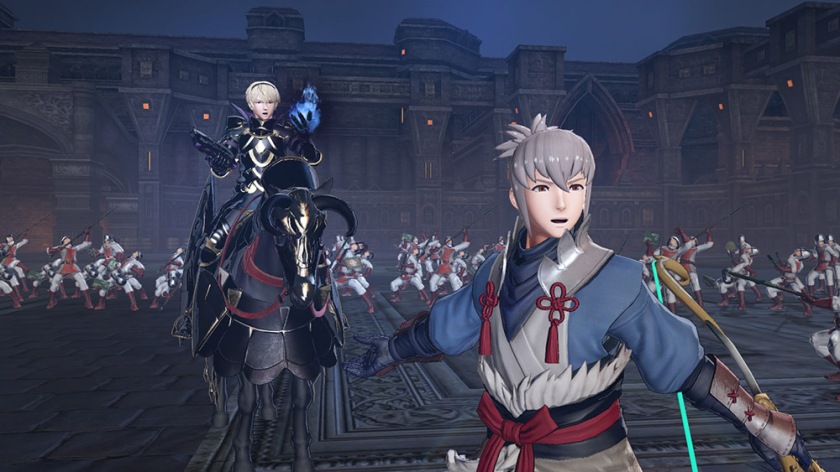 How these characters differ is linked to their unit type. Whereas in the previous build all of the characters were simply different sword users, the units in this build included those on horseback, and pegasus or wyvern knights. The winged units have an additional plane on which to launch assaults with their ability to fly giving a lot more options in combat Also, the ability to play as Takumi (and have Robin as support) showed quite well how the more ranged characters work in the game. In short, this game is looking and feeling fantastic. The aesthetic is a perfect blend of the Warriors-style with Fire Emblem key features, with the level up screen especially causing me to smirk every time with how authentic to the source it is. 20th October is the release of this and it cannot come quickly enough.

I also had a little bit of time with Minecraft: Switch Edition and I cannot deny that the control system of the game leaves much to be desired. The game itself is exactly what you could expect from Minecraft, so if you’re a fan it’s all here, but I simply do not understand why a game that is a perfect fit for using the touch screen doesn’t do it effectively. I, in fact had a lot more fun playing on Lego Worlds, which is an absolute joy to play. This is no surprise as the Lego games are consistently well put together, but coming from Minecraft to Lego Worlds felt far better simply by comparison. Both Minecraft: Switch Edition and Lego Worlds are out now for Switch.

Finally, and rounding the main stands were Pokkén Tournament DX, Mario Kart 8 Deluxe, Splatoon 2, ARMS and Metroid: Samus Returns, of which you can click on any of those titles to check out our full reviews on here of them. There were live head-to-heads, gameplay demonstrations and other fun activities run both days I was there by the very capable Nintendo UK team. In fact, it’s always enjoyable and infectious to see the passion and enthusiasm that Bowie and Nimmz bring to the stage at every event. So, in short, a very solid display on the main stands.

The tournament stand I didn’t spend a great deal of time around, but Nintendo UK were running tournaments in ARMS, Mario Kart 8 Deluxe, Pokkén Tournament DX and Splatoon 2 both days, and this is where I assume the UK Championships for Splatoon 2 will be held this weekend too. The staff manning this stand were all friendly, welcoming and very knowledgable about the games being played. In fact, one of the only things I didn’t get to do at EGX that I would have loved to do was show off my skills in Mario Kart. Also, I got the privilege of rubbing elbows with some of Nintendo UK’s finest and got to chat to them about upcoming games and what they’ve been playing recently (the Nintendo UK community manager, James, has a terrifyingly intimidating Decidueye in Pokkén).

I spent a rather large amount of time played Nindies at EGX too, where there was an entire stand devoted to them in the Indies section of the expo. Super Meat Boy Forever is just as fun and visceral as the original, with the return of some utterly fiendish platforming death simulation. I also got to play a retro style run and gun called Huntdown that brings back fond memories of Streets of Rage and Contra with it’s 2-player co-op and wave after wave of grunts to take out. In fact, this is a Nindie I’m going to keep an eye on. Finally from the main Nindies, I got to play a fascinating gravity-based puzzle platformer called Dandara. In this you bounce between floor, walls and ceiling dispatching enemies and trying to reach the exit of each level. Just as interesting to watch as it is to play, Dandara has multiple ways to navigate each level, which I can imagine gives a phenomenal amount of replayability and player agency in terms of progress.

One indie I want for give a bit of it’s own space to is a little puzzle game called Inops by ZRZ Studio. The developers are currently in the process of getting the game onto the Switch eShop and were running the game on their own Switch at EGX. The game itself involves using the left analog to control the cute little blob (or blobs) with the touchscreen being used to manipulate elements of the scenery to progress, such as turning wheels to lower bridges. There’s also the ability to find more little blobs that can then be combined into one big blob for easier navigation through levels, or separated for getting through small gaps. The levels I played were very challenging, but the checkpoints in the game were placed liberally meaning that even deaths didn’t push me back too far. Also, the aesthetic of Inops is simple and clean so the route you’re supposed to take is clear and all obstacles are telegraphed enough to not be unfairly placed in your path. I really hope that this game makes it onto the Switch, it is a fantastic indie and the Switch control system is quite easily the best (I also tried it on tablet).

So, that was my EGX 2017 with Nintendo. A lot of fantastic games were there, and the queues for Super Mario Odyssey were always consistently full. Quite honestly, my only disappointment was that Xenoblade Chronicles 2 was not there, and that is on my purchase list anyway so it didn’t matter too much. Nintendo has truly had a phenomenal year, and is set to continue that trend into 2018 and that was very evident at this event. See you all at EGX 2018.

Did you attend EGX this year, or are you going to? Let me know what you thought of it in the comments or on Twitter (@reuthegamer). Also, are you looking forward to the rest of 2017?