This review was originally posted on Nintendo Scene on 14th November 2017.

There have been some incredibly left-field announcements for the Switch since it’s release in March, almost all of which have been well-received on reveal, if not on release. DOOM, originally released on X-Box One and PlayStation 4 last year, received incredibly positive reviews and went on to win and be nominated for multiple game industry awards. So when Nintendo announced that, following on from the reveal of Bethesda’s first game on a Nintendo platform (a port of Elder Scrolls V: Skyrim), id Software’s lauded revival of DOOM would be brought to Switch too, it piqued the curiosity of a lot of fans. But, how does this dark, violent action game fare on Nintendo’s incredible hybrid device?

The story of DOOM is quite a simple affair, which follows on almost directly from the events of previous DOOM games. Playing as Doom Guy, the protagonist of the previous games, you wake up in a research facility on Mars only to find out that the whole place has gone to Hell (pretty much literally). Essentially, the Union Aerospace Corporation, or UAC, has been experimenting with a relic taken from Hell and has brought a demon army to attack the planet. How much of the story from there you wish to engage with is entirely down to player discretion, as Doom Guy himself does not seem entirely fussed with it either. If the story is what you want, there are a large amount of data logs hidden throughout the world explaining everything from the past right up to the current events. There’s a rich narrative to the events on Mars, which is only made more interesting owing to the fact that it can be ignored entirely.

The gameplay of DOOM is pretty simple insofar you simply kill things, but the levels of depth involved with inflicting violent punishment upon the hordes of Hell is astounding. Firstly, and most importantly, you have the weapons of which there are quite a few. The firearms, interspersed throughout the main campaign, run the usual gamut of handgun, shotgun, machine-gun but then quickly start to deviate into some fantastically over-the-top weapons like the spectacular laser rifle, the Gauss Cannon. These weapons can be switched between on the fly with the press of a button, which is useful as the weaknesses will differ between the different demons, and can also be augmented with additional properties. By finding little drones that are hiding in the levels, players can add these augments to weapons giving them such effects such as remote detonation for the rocket launcher or charged shots for the shotgun.

The other two main mechanical weapons the player has at their disposal are the Chainsaw and the Glory Kill. The chainsaw is a weapon that can be equipped at the press of a button and can instantly dispatch almost any enemy in the game if it has the right amount of fuel to do so. Killing a demon with the chainsaw results in the fallen foe dropping a lot of ammunition for your other weapons, so using the chainsaw effectively can really bring the player out of a tight spot if ammo is low. The Glory Kill is where some of the more graphic violence occurs and very spectacular it is. When shooting demons, you might notice that they stop moving and start to flash blue. If you approach the demon and press in the right stick, Doom Guy will use a visceral melee-based attack that instantly kills the demon and causes a lot of health items to drop. When you add to all of the above little consumable items like grenades, then you have a game that really promotes movement around the maps with constant weaving in and out of hostile attacks and closing in for Glory Kills when the moments arise. 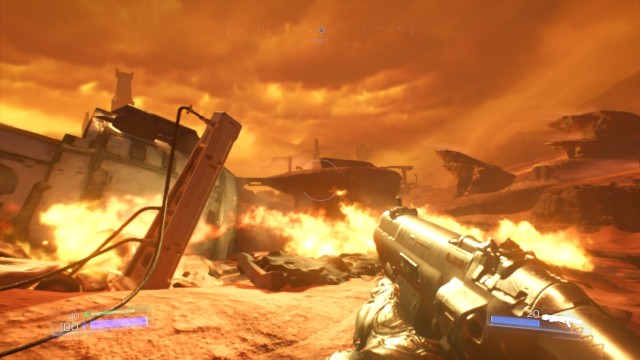 Exploration is key in DOOM as there is a phenomenal amount to find. As well as the aforementioned drones and data logs, there are various collectibles and challenges hidden throughout the levels. The collectibles themselves entail cute little Doom Guy figurines and fallen UAC soldiers which, when found, gift the player with an upgrade point that can be used to enhance various aspects of Doom Guy’s own suit, reducing environmental damage or even for locating other hidden goodies in the levels. The challenges come in the form of Runes, transporting the player to an isolated scenario that, if completed successfully, gives an item that can be equipped to further enhance the player’s power. What’s more, not only are there lots of collectibles in each level, but some levels have hidden segments in them that are modelled on classic levels from DOOM or DOOM II, giving a huge change of pace and an injection of retro-inspired nostalgia for anyone that has previously played a DOOM game.

We cannot ignore the other main mode in DOOM on Switch though, the online multiplayer, and it is here where the game suffers in comparison to it’s counterparts on other consoles. The comparatively lower frame rate and the arguably poorer online infrastructure on the Switch version of DOOM cause the online Death Matches to be jittery to witness and struck dumb with very high levels of input latency. This is a shame simply because when they do run smoothly, the online multiplayer matches can be incredibly fun and full of frenetic action. Also, there are various unlocks in the online modes in terms of different colour palettes and armour sets for your charactet, different weapons and various other fun little customisable elements. The only problem is that with the online modes so unfortunately horrible at times to play, unlocking these is a chore, at best, as often your opponents will not be where they should be when you fire and therefore a lot of your deaths will be more than a little cheap.

Aesthetically, however, DOOM is a complete tour-de-force. For the most part, this game is visually stunning on Switch, and undocked it is genuinely hard to fault how well it runs. All of the locations are sweeping and full of little details and little nuggets of architectural narrative, all of the weapons are exactly as over-the-top as expected from DOOM whilst remaining (for the most part) within some sort of realism), and all of the monsters are incredibly detailed and wonderfully disgusting to behold. The visual issues with this game come in TV mode, the issues in this port start to show. When on a bigger screen, all of the flaws with the game from a visual standpoint really standout, showing all of the frame rate drops and slight dips in graphical fidelity in comparison to the other iterations of this game. This being said, the drops in frame rate, while playing in handheld mode, are hardly noticeable. The sound design in this game, however, is close to flawless matching dark and brooding atmospheric music during exploration with aggressive synthesised heavy metal during combat. Matching this with the wonderful sound effects from the monsters and the satisfying blasts from the weapons, this game is complete aural treat.

So, should you buy DOOM on Switch? If you want a fantastic, immersive and visceral shooter to play on the go, then this is a superb purchase and worth every penny. This game is visceral, fun, and challenging with an immense wealth of content to explore and items to find. However, if you have played this game before, or have another of the main consoles that DOOM is playable on, it is very hard to recommend – especially if you are purely intending to play on TV. Owing to the lower visual quality and frame rate, the other versions are still definitely the best places to play this game. DOOM is a completely phenomenal game, and the achievement of getting it onto the Switch is astounding, but if handheld isn’t your priority, there’s better versions.

Thank you to Bethesda for kindly supplying this game for us to review.
DOOM is out now on Nintendo Switch, both in retail stores and on Nintendo eShop.