This review was originally posted on Rice Digital on May 25th, 2018.

It’s difficult where to begin with reviewing a remaster of any game. Do you focus on the differences between the original and the new fangled version? Do you treat the game as a totally fresh entity, or do you judge it in the light of its legacy? Speaking of which, Bandai Namco are soon to release Dark Souls Remastered, the remaster of the 2011 arguable modern classic. But how does the game stack up on modern hardware?

The story of Dark Souls is something that I’m very keen not to spoil. There’s something about the dark, something about fire, and then something about Lords and an odd thing called the ‘Furtive Pygmy’. The narrative of Dark Souls is revealed slowly in layers through item descriptions, conversations with NPCs and via a large dose of architectural storytelling. This does mean that a lot of the story can be missed, but this isn’t really to the detriment of the game as the world itself is essentially built up by the experiences of the player.

Dark Souls Remastered is essentially an action game, with RPG elements insofar that you have various statistics that can be increased through levelling. The gameplay can be essentially divided into exploratory and combat scenarios. Starting with the former of these, the world of Lordran is a complex, intricately designed labyrinth, full of hidden secrets and items to find; and a new piece of armour, weapon or key item could be around every corner. Not only this but shortcuts are everywhere, sometimes more difficult to find, but always give that same sense of relief when you find one and find yourself back at a bonfire for a brief respite. 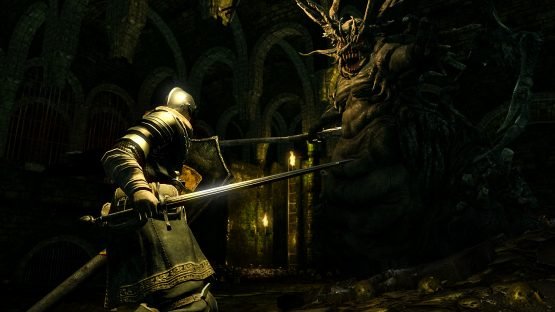 The bonfires are possibly one of the most important aspects of the game; not only recovering all of the player’s health and Estus Flasks (used for healing), but also being the hub in which the player can level up, return to human form, or even sort items after acquiring the right item. The downside to this, as there always is with these games, is the revival of all enemies in the game (excluding unique enemies and bosses). So, even bonfires, one of the safest aspects of the game, require a certain amount of caution as often it is better to forge on than to revive your adversaries. This being said, bonfires act as checkpoints so if you die you revive there, and with your current collected souls (the currency for everything in the game) on the line, can you risk not resting?

The emphasis on exploration is subtly pressed upon the player through gentle coercion, usually found in the form of glowing blue orbs, but that doesn’t mean that the player can just run wherever they want. The reason for this is that Dark Souls Remastered will very likely punish you if you try. Bottomless pits, boulders, flaming barrels, , the game does its absolute utmost to instil an undertone of caution to match the enthusiasm of exploration. Furthering this concept of gentle coercion, the game will also try to dissuade you from taking the non-prescribed routes, through the use of tougher enemies to halt your progress.

The main reason to exercise caution though is in the combat because oh boy, does this game punish you in combative scenarios. The best way to think of the combat is in terms of strategic action in that it is all slow and deliberate; it’s all about spacing, defending, dodging and waiting your turn, and if you don’t adhere to that, the “You Died” screen is your prize. Never is that more true than with Dark Souls main combat staple as far as many are concerned, the bosses. Often gigantic, powerful creatures that sometimes incorporate light puzzle elements that need to be solved to slay them successfully. Often these are the true tests of skill, but never discount the journey to them as that can be equally difficult. 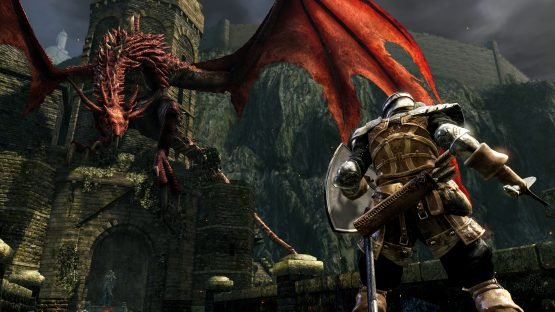 Every action you make in the game uses stamina (the green bar in the UI), with every action requiring a portion to execute it. Because of this, although, the moment-to-moment combat depends on the weapon you’re wielding, but there’s a realistic feeling weight to them, with heavy, sweeping swings on axes using more stamina and short, sharp stabs with spears using less. The problem being in a combative scenario, of course, that the enemies are armed too and a lot of them have similar attacks to you, including kicking your shield away or charging in with a heavy attack. However, as they have no visable stamina limit, the proxy lies with the player to manage their stamina to minimise the damage caused.

The quintessential Dark Souls online experience returns complete with invasions and jolly cooperation, so you and your friends, should you want to, can merrily trek through Lordran together. To do this you simply have to return to being human at a bonfire and the place your “summon sign” or inspect another persons. As a great touch that has been brought over from the latter games in the series, the players can set a password to keep their game strictly between friends should they wish, or just open the floodgates for anyone. Another improvement is the ability in Dark Souls Remastered to have up to six players in one game, so bring on those turf wars!

The visuals are actually where my biggest sticking point occurred overall with the game. Although the upscale to full high definition looks incredible, a fair amount of what made the original has been lost in the improvements. For instance, although the new lighting is a godsend from a gameplay perspective as everything is just that little bit easier to see, it erases a lot of the foreboding nature that gave the original its edge. Furthermore, the increase to 60FPS has exposed some of the more awkward movement animations that were impossible to notice in the original game. This being said, some of the visuals and vistas in this game are very much worth the upscaling, and certain areas have been massively improved by it. 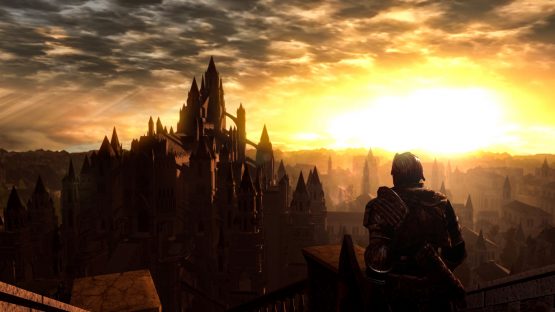 The music is completely phenomenal, ranging from the epic urgency of the various boss themes to the gentle sobriety of Firelink Shrine. The sheer lack of music in many parts of the game truly make the moments that are scored feel more like events in their own right than single encounters. Also the sound design throughout the game oozes with personality, with the growling of creatures heard in the distance, or the satisfying clang of the weaponsmith’s hammer on his anvil. Everything is perfectly placed, and often at the perfect volume, to build an incredibly thick atmosphere that  Simply put, Dark Souls Remastered is a masterclass in sound design.

Whether I can recommend Dark Souls Remastered depends on a lot of factors. A lot of the improvements are minor and won’t really affect your gameplay if you are fresh into the game, as most of them were clever fixes of gripes that many had with the original, such as adding the ability to consume more than one item at once. If you have previously played the original, there are little changes here to warrant returning to Lordran (unless you want to of course). However, the core of the game is still one of the most intriguing, challenging, and beautifully created gaming experiences currently available; so, I wholeheartedly recommend picking it up despite its flaws.