In an almost impossible marriage a few years back, the world of Dragon Quest was put through a Minecraft lens and the end result was the phenomenal Dragon Quest Builders. Placing the player in the shoes of the hero of the first Dragon Quest rebuilding the world was inspired, so needless to say I was more than a little interested to see how the sequel would turn out.

END_OF_DOCUMENT_TOKEN_TO_BE_REPLACED

This review was originally posted on Rice Digital on September 3rd 2018.

I love the Dragon Quest series, and have done for years, and so it is with great joy that I beheld the announcement of Dragon Quest XI: Echoes of an Elusive Age, especially after the western absence of the MMORPG Dragon Quest X. But, after such a considerable wait for the West since 2010’s Dragon Quest IX: Sentinels of the Starry Skies, how is the game and series faring?

END_OF_DOCUMENT_TOKEN_TO_BE_REPLACED

This article was originally posted on Nintendo Scene on 8th February 2018.

It likely surprises no one at this point when it comes to me getting excited about new JRPGs coming out, especially if they are coming to Switch and I can play them whenever and wherever I would like to do so. This being said, I’m not normally a fan of building or sim games such as Stardew Valley or Minecraft as I find them a little overwhelming and ultimately dull. However, I could not ignore Square-Enix when they announced that they were bringing Dragon Quest Builders, their mash-up of building games and their popular Dragon Quest series, to the Switch. I wanted, at least to have a play around in their blocky reinterpretation of the traditional Dragon Quest formula. One question though, how is the game?

END_OF_DOCUMENT_TOKEN_TO_BE_REPLACED

This review was originally posted on Nintendo Scene on 4th February 2017.

First review of 2017, and what a surprise, it’s another JRPG. After the incredible remaster of Dragon Quest VII on 3DS, which you can find my (overwhelmingly positive) review of here, now I have have the joy of playing Dragon Quest VIII: Journey of the Cursed King. Originally released on the PlayStation 2 in 2004, Dragon Quest VIII is arguably considered to be one of the best in the franchise and now theme is playable on the move.

END_OF_DOCUMENT_TOKEN_TO_BE_REPLACED

This review was originally posted on Nintendo Scene on 13th September 2016.

The other day I was having a somewhat heated discussion with a work colleague about the rise in remaster culture recently, or more specifically the tendency towards releasing remakes instead of new titles. As much as I agreed with him on various points, I held the point that sometimes players will not have played the titles originally and would likely love the opportunity to revisit old games to either see what the fuss was about, or to complete a franchise that they have have missed a couple from. One such occasion with me personally regarding my points is Dragon Quest. Now, I intend to right the wrong of missing it by playing Dragon Quest VII: Fragments of the Forgotten Past on Nintendo 3DS.

The story of DQVII is both elaborate and simple, slow and quick to unfold. Starting on your initial island, you are told that this little island you find yourself on is not only the solitary landmass in the world, but it is the only one that ever has been. Not believing this, and allying yourself with the prince of the little island, Keifer, and the daughter of your village’s mayor, Maribel, you begin your quest into discovering the world that is strangely missing. I can’t say much more about the plot without ruining major plot points, but needless to say you visit the other islands that disappeared, unlocking more of the world’s narrative and that of your characters like an exuberant jigsaw. The reason I said that the story is slow to unfold is because the game is rather slow-starting; once the narrative starts rolling it doesn’t stop, but there is a period at the beginning in which nothing really happens.

The writing of this title is both clever and incredibly funny at points. The names of various enemies throughout the game are puns that, short of being hilarious, did bring the occasional chuckle if only because of their ludicrous nature. Furthermore, and an adorable touch, is that the different people around the game world have different accents that are often subtly represented but noticeable. The impression this gives is of an immersive and diverse world. For this impression to be given, without even acknowledging the aesthetic proponents of the title, is wonderful and a testament to the writing and the game as a whole.

The gameplay is where this game truly shines its brightest. A solid return to the days of old JRPGs with proper turn-based strategy combat, dungeon exploration and reckless stealing from everyone you meet. Firstly, the exploration is a simple affair of using the circle pad to move and the shoulder buttons (L/R) to rotate the camera, using “A” to interact with objects, chests and people. Just the ability to rotate the camera so readily and easily adds to the simple but brilliant gameplay as simply exploring towns, where there can be objects and doors hidden in the most innocuous of places, can prove a daunting task when you’re stuck and you need to achieve something particular to progress.

In the field and in dungeons, enemies appear around that you can either avoid and run from or confront. The enemies will only chase you for a set period of time, but if they catch you (or you run into them) a battle starts. The action then switches momentarily to first person perspective to show the enemies in the battle whilst selecting actions and zooming out to show the actions occurring. The strict turn-based structure combat allows the selection of all of your characters actions, before activating that round of turns, so actions like healing and buffs/debuffs need to be considered in advance to avoid party members falling. The only occasion this becomes irritating is when you have additional characters with you that aren’t part of your party. These characters operate individually and outside your control, which can lead to the player accidentally healing characters that have been healed by these assists and therefore wasting precious MP. This, however, is a very small gripe against what is a remarkably solid gameplay experience.

To look at and to listen to, DQVII is astounding. The revived and enhanced graphics laid over the already beautiful cartoon aesthetic leave the game having the impression of a moving, playable anime. Furthermore this greatly enhances the game without losing the charm of the original. The character sprites, both main and even the NPC ones, are beautifully designed and expressive and the influence and vision of legendary artist Akira Toriyama can be seen in every asset in the game. As such, the world is perfectly believable and realised as a coherent whole and is wonderful to explore. The sound design, as with most games in the series, is absolutely stellar with some returning classic themes and catchy and fun new songs thrown into the beautiful mix. The end result is a solid experience that feels very whole and familiar, but astoundingly unique. 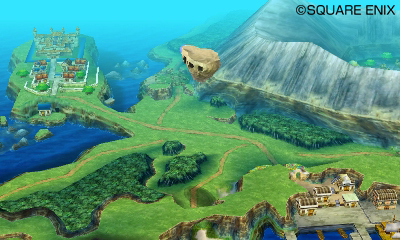 So, should you play Dragon Quest VII: Fragments of the Forgotten Past? I want to say a resounding yes, but it depends on your enjoyment when it comes to JRPGs. If you love them, this is utterly essential. It’s a hark back to the simpler and more solid experiences of the past, whilst still feeling fresh. If not, I would advise either caution or steering clear entirely. There won’t be much here to convince you on the genre. In general though, and personally speaking, it’s an incredible experience and I would highly recommend it.

Thank you to Nintendo for kindly supplying the review code to play this game.