This review was originally posted on Nintendo Scene on 15th October 2016.

I must admit that I hesitated when it came to “claiming” this game to review in the hypothetical Nintendo Scene offices; not because I thought it would be bad or I wouldn’t enjoy it, but because I know that my almost shameful love of Disney would come to light. But here we are, after several hours, many stickers, and countless cute little dialogue bubbles … my thoughts  on Disney Magical World 2.

The story of the game is incredibly simple, as would be expected from Disney. Your little character (made in an enhanced Mii Maker kind of set-up) comes to live in the town/city of Castleton, which is inhabited with various well-known Disney characters, as well as a wide variety of randomly generated characters just like you. After your rapturous welcome, which I can’t help but find a little odd for someone the residents didn’t know until you stepped off on the jetty, life in Castleton begins.

The plot becomes, from then for a few hours, completely linear for the player in that you get essentially carted through the plot points of meeting the key characters, learning greetings, and being shown all the basic mechanics of the game. That is not to say that the whole game is linear, as the story really opens out after the extensive tutorial section with other “worlds” becoming available to explore. Each of these have their own narrative threads that are both very much isolated within the plots of the individual movies (à la Kingdom Hearts), whilst still making sense within the whole.

Mechanically, despite this being essentially a children’s game, Magical World 2 is a very solid experience; there are many facets to this diamond in the rough, so I’ll try to cover all of them. The main gameplay involves running around the town/city, talking to other residents, completing quests for them, and opening new areas using the stickers you gain for completing set objectives (so, in simple terms, it’s Animal Crossing with Disney characters). However, the game really does contain a bit of everything. For instance: there’s dungeon-crawling-esque segments where you fight ghosts while collecting treasure and resources; there’s rhythm action dancing segments; and there are countless pieces of furniture and clothing that you can create in the game too to really customise your experience. Basically, if you want a Frozen-themed house and to run around the game world in Elsa’s dress from the “Let It Go” song in the film, go right ahead.

As a secondary feature running in the background, there’s time management portions when you acquire the café, in which you have to make sure they stay in stock of food and drink. Obviously this relates to the dungeons again, and also gets you explore the different worlds for resources (leading to you having a little farming patch later too). But, if you do particularly well, inventing new dishes and serving lots of customers, you get to throw a Party. The themes of the Party can be manipulated by changing furniture, staff outfits, or by serving themed food and if you get the theme nailed adequately, characters from that theme will attend the Party too.

There’s one core mechanic I haven’t spoken about yet and it’s the most staying one of them all. Throughout the whole game, photos are given a massive importance in that every major event has a little flying camera come in and offer to take a photo, which is stored on the 3DS SD card. Not only that but screenshots can be taken at any point by holding “L”, which is why every new character you meet will perform an incredibly narcissistic dance and pose, indicating to take their picture. Needless to say, my SD card now contains a lot of cute but ultimately pointless images, but this is a feature I can imagine children being a huge fan of, likely excitedly showing pictures of to parents.

Aesthetically, this game is adorable, bright and colourful. All of the Disney characters are beautifully realised in 3D (although arguably not as well as Kingdom Hearts), and the enhanced Mii characters are cute and fit in well with the Disney characters without it feeling like a bizarre “us and them” kind of set-up. The world itself is also well designed, very pretty and easy to understand and navigate (with a small map on the bottom screen containing icons to help get around). However, musically Disney’s Magical World 2 is absolutely infuriating. The music is very Disney-sounding, but lacks almost any charm to it, leaving songs that are painfully cheery and mind-shatteringly repetitive. I can make concessions on this because this game is not technically aimed at me, however, any adult playing this would likely do what I did and turn the sound off while in Castleton, just for sanity’s sake.

Now, should you buy Disney Magical World 2? If you are a Disney fan of any age, there is a lot of enjoyment to be had here. I would like to warn though, that if you’re an adult, the tutorial at the beginning is both very long and holds your hand the whole time. So it does get agitating waiting for the game to get started, but once it starts it’s an enjoyable, if simple experience. For children though, this game would be fantastic if they’re a Disney fan as the amount it allows you to do falls just shy of going to Disneyland itself. If you aren’t a Disney fan though, steer well clear. 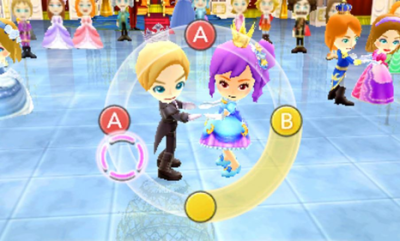 Do you think you will pick up Disney Magical World 2, or any thoughts on the game? Drop me a comment of tweet me @reuthegamer.

Disney Magical World 2 is out now for Nintendo 3DS.
Thank you to Nintendo UK for kindly supplying the review copy of this game.