It’s absolutely no secret that I am a huge fan of JRPGs. When the original Xenoblade Chronicles released on Wii, and later on 3DS, I billed it as my favourite games of those years on their prospective consoles. The beautiful worlds, fantastic characters, and wonderful combat system sold me from almost the moment I started playing. So, when a second Chronicles game was announced for Switch I thought that my Christmas had come early. Little did I know that it most definitely had come early, with Xenoblade Chronicles 2 billed for December this year. However, now that I’ve had a significant amount of time with the game, how does it fare both as a game and versus the legacy the previous title laid out for it?

The story of Xenoblade Chronicles 2 revolves around playing as the wonderfully upbeat Rex, a salvager who wiles away his days selling the scrap he drags up from exploring the Cloud Sea with his ship and home, which is a Titan he affectionately calls “Gramps”. As a means of explanation, Titans are giant, ancient creatures on which life of all kinds thrives, and they are all living on the world of Alrest, wading through and exploring the gigantic Cloud Sea. Exploring these Titans we discover that amongst the peoples of these worlds, there are particularly prolific individuals called Drivers that can control powerful, sentient weapons called Blades. Shortly after the game begins, Rex becomes embroiled in a plot to locate a legendary Blade called the Aegis, who turns out to be a dark pink sword Blade called Pyra, during which he forges a bond with her and begins a quest to protect her and fulfil a promise to her.

One of the main aspects of the game play (as mentioned briefly earlier) is centred around exploring the many Titans of Alrest; finding towns, collectibles and discovering locations. Every location you uncover will net you experience to level your characters, and more collectibles to locate, which can be used in a large variety of ways; including selling for money, and for upgrading equipment. Furthermore, hidden in the world are Secret Locations, which are normally difficult to reach or require the defeat of powerful creatures, and net the player significant rewards when found. The collectibles themselves are wonderfully varied, from flowers and trees, to insects and devices, and are contextually relevant to the location they’re found, furthering the cohesion of the world-building. Every town contains a significant amount to do, with various shops, people, and quests to find. They also mark shift in exploration, giving the player a momentary respite from the huge and sometimes bewildering open worlds to explore.

As another shift in momentum as you explore, and if the player has cylinders in their inventory, the player can have Rex dive into the Cloud Sea to retrieve salvage from the sea bed. These salvaging points can be found throughout Alrest, and are denoted by a little blue anchor. Activating these excursions will begin a short sequence of quick time events to dictate the reward of the salvage, with successful button presses netting far greater rewards, and also the occasional enemy encounter. There are other occasions in which these quick time events occur, however this is the mechanic that has the greatest reward for the player in terms of success. But, I will discuss the other main occurrence of quick time events when I discuss the combat.

As an interesting thing about Xenoblade 2 and how the gameplay and narrative intrinsically link is that, much alike most JRPGs, is that the main plot of the game is not the lion’s share of the overall narrative. Wandering around Alrest, you will likely spot characters that need your help, which is indicated by a blue diamond over their heads. Talking to these characters will give you the opportunity to expand the lore of the world, meeting other characters, altering events between characters, and aiding them in particular activities. These can comprise of everything from simply locating another character or finding a certain amount of a particular item, to a sequence of different tasks that need to be completed to finish the quest. Furthermore, this quests are able to be selected as an active quest, making them easy to locate while exploring.

The other major aspect of the game comprises of the combat, which is both simpler and more complex than the combat scenarios in previous instalments of the franchise. There are still various  monsters and creatures out in the world as you’re exploring, all of which have particular levels. You can choose to engage any creature you see, and then you enter combat with the creature in question. In this mode, the character currently under your control will auto-attack while in range, freeing the player up to move the character around the enemy and activate special attacks, or Arts. Some of these Arts are more powerful from a particular position, can be made stronger by activating them at the right time, and have bars that need to be filled to be used, which is filled by performing the auto-attacks. Furthermore, once a certain amount of Arts are used in a single encounter the player can activate a super technique that is exacted by that character’s assigned Blade. These super attacks can have their effects or power dramatically increased if the player is successful in the quick time event that appears on the screen before the attack is exacted; however, the attack will still damage the enemies if the quick time event is failed.

With Xenoblade 2 being a JRPG, the combat is used for enhancing and levelling up your characters. In fact, with this game every encounter nets you three different types of experience simultaneously. The first is the standard EXP, which will result in your character levelling up in real time and has its progress shown by a bar under the HP bar on the battle screen (but more on that soon). The second is WP, which is used to enhance the power of the Arts that your characters currently have and can alter anything from the damage, to the recharge time, or even the additional effects of the attack. The third is the bonus EXP, which can only be used by resting at an inn and can gain levels for each character. The only issue with the third type of experience is that it is very easy to forget it’s there, especially if you are the kind of player that just enjoys exploring the world and rarely rests at inns. Furthermore, with the HP of the characters automatically healing between battles, the inns are relatively unneeded, so the third experience is even easier to forget.

The menus of the game are far simpler than other JRPGs, including those from the same franchise, and are incredibly simple to navigate. Firstly, during battles, everything you need to know is neatly shown around the edges of the fight: the Arts currently equipped are listed the bottom-right, with the buttons required to each Art based on its placement, and information as to additional effects of the Arts you have locked in at the time; the current equipped Blades are on the bottom-left and can be switched between using the D-Pad; finally, the top is devoted entirely to HP bars with the enemies and allies basic stats shown and updated in live time. In short, the battle menu is uncluttered and simple, yet while having all of the information that is needed to be effective in battle. The rest of the menus in the game follow this same principle, which places this as far superior to the previous iterations in the franchise, and definitely makes Xenoblade 2 a far better entry point into the franchise and into JRPGs in general. 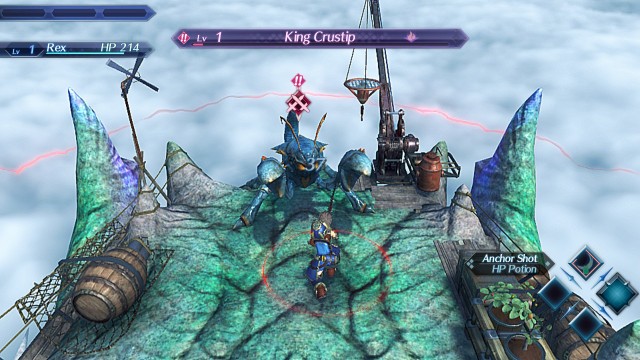 The only real complications in the menus lie in the Characters area, with the slightly less simple Affinity Chart. This gives all of the Drivers and Blades boosts to particular statistics or grants additional attacks or abilities. The only reason that this could be construed as complicated is because the pre-requisites for unlocking them can be a little unclear, however most of these unlock simply by exploring and fighting creatures out in the wild. There are multiple tiers of the chart for the Blades, which are locked and can be unlocked simply by keeping the Blades with their Drivers. These menus look far more bewildering than they actually are, and the tutorials in Xenoblade 2 are more than sufficient to explain everything simply and effectively. This principle goes for almost everything in this game too, the tutorials in this game are incredibly detailed without being guilty of the usual problems of hand-holding other games would do. I’ve barely scratched the surface with the mechanics of Xenoblade 2, and I’m hesitant to cover any more so as to not ruin too much of the game for a newcomer. Needless to say, the sheer amount of content in this game is genuinely staggering.

Aesthetically, Xenoblade 2 is close to flawless in my opinion. All of Alrest is beautifully realised, in a way incredibly similar to the original game of this franchise. Every sunlit vista, every cavern, every town, and every body of water is beautiful to behold. The interconnectivity is stunning too, with every area you can see being reachable if you just care to explore and find the way to get there. The music is incredible too, with the return of the same brilliant composer of the original game, so thankfully the arguably repetitively grating music of Xenoblade X is entirely absent. All of the music is phenomenal, perfectly suiting its time of use, and all of the sound effects are satisfyingly punchy. Also, the English voiceover is one of the most enjoyably diverse I have ever seen, with multiple regional dialects represented (I mean, the protagonist of the game is Scottish) and the performances are fantastically emotive without coming across as cheesy. Finally, this game is another example of Nintendo performing fantastic optimisation between the different game modes; Xenoblade 2 looks equally fantastic in both handheld and TV modes. 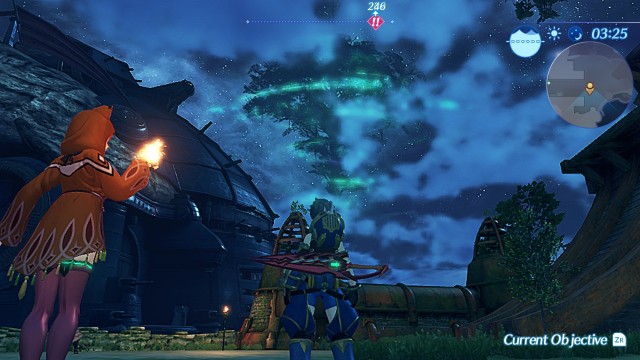 So, should you get Monolith’s latest iteration of the Xenoblade series? From me it is a resounding yes, but it is an opinion that should be taken with the knowledge that I have a heavy bias towards JRPGs. The sheer amount of content here is phenomenal, the characters are all well written and incredibly charming, and the combat is intuitive yet incredibly flexible allowing a lot of player choice. This being said, I’m not entirely sure that those who are not already fans of JRPGs would be able to find much in this that would sell them. Although the game’s tutorials are incredible, if stat-heavy and incredibly fantastical games aren’t for you, this will not be either. As a means of a final statement, Xenoblade Chronicles 2 is an almost perfect game in my opinion, taking an already solid framework and refining it into one of the best JRPGs of recent years, and creating a game that could very easily stand in the amongst the best examples of its genre. Utterly quintessential.

Thank you to Nintendo for kindly supplying the code to review this game.
Xenoblade Chronicles 2 comes out Friday 1st December on retail and eShop.